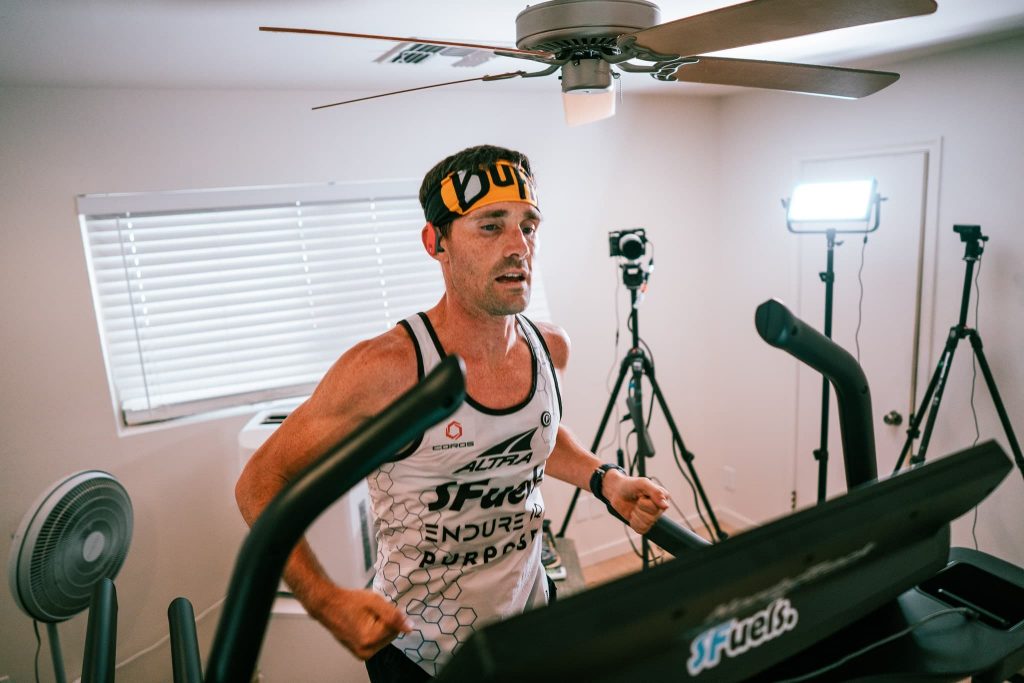 For many people, the coronavirus meant being at home for extended periods of time. While house projects and work conference calls probably consumed most of that time for families around the world, one man, in particular, was busy doing something totally different. That was setting a world record for running 100 miles – on just a treadmill. On May 16, 2020, Zach Bitters completed 100 miles in his home with a time of 12 hours, 9 minutes, and 15 seconds.

This 34-year-old world record holder isn’t new to the realm of 100 mile runs though; he captured the world record for a 100-mile run back in August of 2019, coming in with a time of 11 hours, 19 minutes, and 13 seconds. As an ultramarathon runner, multiple races were set up on his docket for 2020. Unfortunately, with the rise of COVID-19, many of these races were canceled for the year. Because of this, Bitter began to figure out other alternatives to get some races in, and this turned into a 100-mile race that he could do at home, with a record previously set by a man named Dave Proctor who ran 100 miles on a treadmill in 12 hours, 32 minutes, and 26 seconds in May of 2019.

With the race back in August under his belt (and a pace averaging around 6 minutes and 48 seconds), Bitter knew that running on the treadmill would be different than running inside on a track. Already a seasoned pro at knowing how to run on a track, Bitter switched up his training a bit in order to accommodate for a long treadmill run. A large part of that training, according to Bitters, was the psychological piece. Because of this, he fluctuated his pace throughout his run around a 7-minute mile pace. Biomechanically he wanted some variation as well, so he planned to make changes to the incline on the treadmill sporadically throughout his run.

Speaking of treadmills, Bitters actually alternated between two NordicTrack X22i Incline Trainer treadmills in his home the day of his record-breaking race; this was due to the fact that the treadmills automatically turn off after a certain period of time. Mentally, this switching of treadmills was also a good thing – after all, running on a treadmill for long distances can definitely be taxing on the mind, especially since there’s no technical forward movement like there would be if you were running on a track.

Bitters and his wife set up the two treadmills inside their home, and included a fan in the room as well. Even with the air conditioning in the home as well to help cool things off, it was very different for Bitters to run in a room than on a track – not only is there heat coming from the machines, but heat from Bitters as well, which made the temperature in the room higher than he typically trained. Due to this rise in temperature (60 degrees at the indoor track versus closer to 70-75 in his home), Bitters noticed that he became dehydrated quickly. He used S-Fuel Race+ hydration mix to stay on top of his fluids, noting that he only likes to use liquid calories while running.

Bitters used pacing benchmarks, podcasts, and music to help him pass the time through his 100 miles, and finished his treadmill race with a toilet paper finish line created by his wife, Nicole. This endurance athlete and coach still has lots of running to do, with a possible run planned for cross country in 2021. That wouldn’t be surprising for this ultramarathoner, though – he’s up and ready for any new challenges, so keep your eye out for this running superstar in the coming months!